To specify your desired starting point of the analysis you have to use the input form at the STRING start page.

You can search STRING by single protein name, multiple names or by amino acid sequence (in any format) There are also example inputs and a random input generator which will randomly select a protein with at least 4 predicted links at medium confidence or better. There is a organism entry to see if your species of interest is available. There is the possibility to search by protein family rather than a protein in a single organism, by searching the COGs (clusters of orthologous groups)

Commonly, you enter your protein of interest by supplying its name or identifier. The organism can be selected by clicking on the arrow or directly typing the name inside the relative input field (an autocompletion mechanism will appear to help you). General names that group more than one organism (e.g. "Mammals", "Chordata") can also be used.

In confidence mode the thickness of the line indicate the degree of confidence prediction of the interaction. Action mode show additional information about the prediction, such as, binding, activation, etc.

Clicking on a node gives several details about the protein. Clicking on an edge displays a detailed evidence breakdown.

A note on the network drawing algorithm

This modeling has some important consequences that the user should be aware of. Firstly, the physical distances between two nodes along an edge in a graph has no meaning; indeed, an attempt to set the edge length based on score would probably result in an unsolvable set of equations! We try to ensure high confidence links are drawn close together through the setting of the modeling parameters described above. Secondly, although the algorithm is deterministic - the same input will produce the same output - the addition of, say, new nodes to the network can result in node locations in the new image completely changing. Finally, although the input node is the 'center' of the network in an abstract sense, it may not be located centrally in the network image.

The navigation take you to different aspects of the data, allowing you change parameters and to see the different types of evidence that supports the predicted associations. 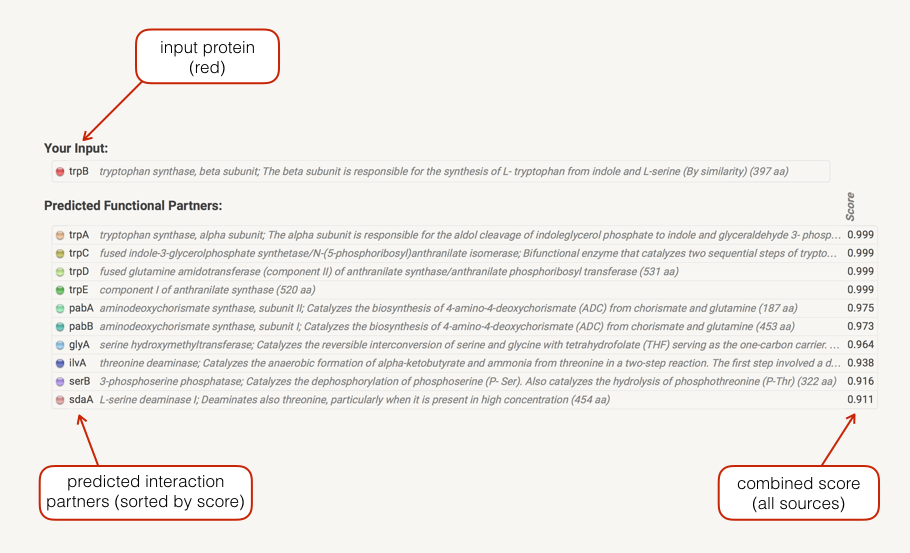 In the Legend section a list your input(s) is shown. Predicted associations are shown immediately in a list below your input, sorted by score. If input gene is a fusion of two functions, both will be shown. Clicking on the score bullets gives you a breakdown of the individual prediction method scores. Clicking on a gene name gives you the protein sequence as well as a list of similar proteins in STRING. Initially, only predictions with medium (or better) confidence, limited to the top 10 interactors will be shown. These parameters can be changed in the data settings. 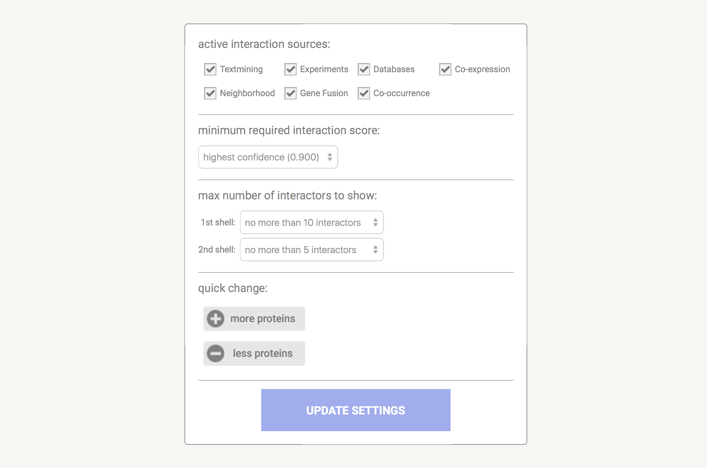 In the data settings you can change the parameters that influence the output. Note that parameters are only changed when you press the 'Update Settings' button.

Under the active interaction sources you can select which type of evidence will contribute to the prediction of the score.

The minimum required interaction score puts a threshold on the confidence score, such that only interaction above this score are included in the predicted network. Lower score mean more interaction, but also more false positives. The confidence score is the approximate probability that a predicted link exists between two enzymes in the same metabolic map in the KEGG database. Confidence limits are as follows:

There is a options the set how many interactions are shown that directly connect with your input by setting the 1st shell and how many indirect interaction that connect to a protein in the first shell by setting the 2nd shell. Please note that this can result in fairly large networks that may take a while to compute and download.

Note that you can click on any node, and the subsequent page offers a link to use that node as the input - effectively placing it in the center of the image. Repeated use of this mechanism allows you to explore large regions of the network.

You have the convenient option the change the parameter setting by pressing either of the buttons und quick change. 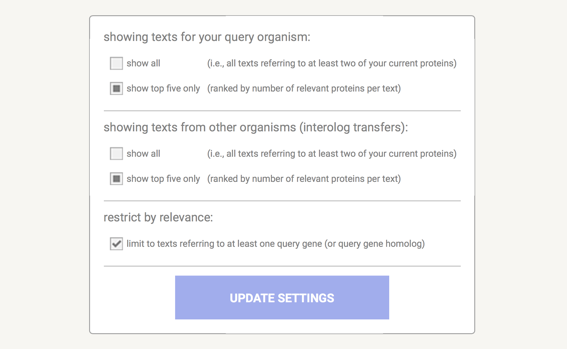 The dialogue box shown above is the one for the Network View. Network specific parameters are: 'edge scaling factor' - this reduces the length of high-scoring edges so that the images will be drawn more compact, and low scoring hits will be spread out further. Lower values mean more compact images, higher values will cause more spread.

Here you can select the meaning of network edges of the displayed network. You can choose between:

The network display mode gives you the option to change the format of the displayed network. The options are:

Finally, you can disable structure previews inside network bubbles by checking the check-box protein structure information.

In this section you can export your current network to the following formats:

The neighborhood view shows runs of genes that occur repeatedly in close neighborhood in (prokaryotic) genomes. Genes located together in a run are linked with a black line (maximum allowed intergenic distance is 300 base pairs). Note that if there are multiple runs for a given species, these are separated by white space. If there are other genes in the run that are below the current score threshold, they are drawn as small white triangles. Gene fusion occurrences are also drawn, but only if they are present in a run (see also the Fusion section below for more details).

The occurrence view shows the presence or absence of linked proteins across species. Proteins are listed across the top of the page and a phylogenetic tree with species names is listed down the left hand side. In the subsequent grid, the presence of the protein in a species is marked with a red square and absence with a white space. The intensity of the color of the red square reflect the amount of conservation of the homologous protein in the specie.

The fusion view shows the individual gene fusion events per species. The species in which fusion occurs are listed to the left. Genes are colored according to the table at the bottom of the page. White genes are those which are fused but not directly linked to the input at the selected confidence level. Hovering above a region in a gene gives the gene name; clicking on a gene gives more detailed information. 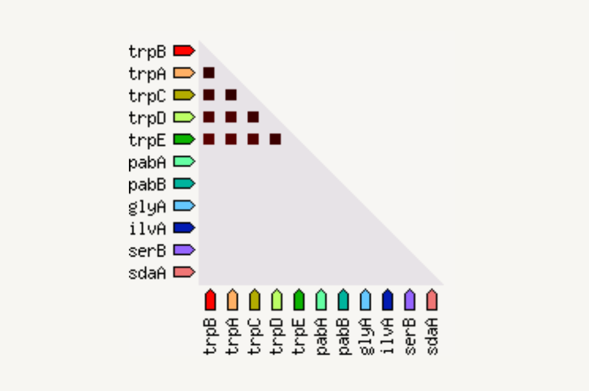 The coexpression view shows the genes that are co-expressed in the same or in other species (transferred by homology). Co-expression is shown by a red square: more intense color of the square represent a higher association score of the expression data.

The experiments view shows a list of significant protein interaction datasets, gathered from other protein-protein interaction databases. The name of the database is present in the grey header of the table: you can get more information on the group, clicking on the "info" link. Below the header, the organism is reported together with the proteins of the network that are present in this group.

This view shows a list of significant protein interaction groups, gathered from curated databases. You can get more information on the group, clicking on the "info" link on the grey rows. Clicking the bubbles next to their respective gene names give information of the individual proteins.

The text mining view shows a list of significant protein interaction groups, extracted from the abstracts of scientific literature. The title and the abstract of the publication are displayed together with a link to the publication.

The analysis section give some brief statistics of the inferred network, such as the number of nodes and edges. The average node degree is a number of how many interactions (at the score threshold) that a protein have on the average in the network. The clustering coefficient is a measure of how connected the nodes in the network are.
Highly connected networks have high values.

There is also an enrichment analysis for Gene Ontologies, pathways and domains. Basically, this shows term that are more enriched in the set of proteins in the network than the background.